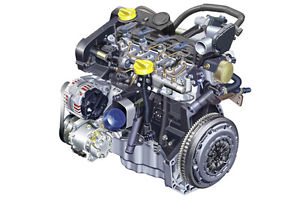 The K9K is a family of straight-4 turbocharged diesel engines co-developed by Nissan and Renault. They have been in production and widely used since 2001. The turbocharger is provided by Borg-Warner. It has a displacement of 1461 cc and is called 1.5 dCi (diesel Common-rail injection). Fuel injection systems were supplied by Delphi on the lower power level versions (up to 66 kW/90 hp) and by Continental (ex Siemens) on the higher power level versions (70 kW/95 hp and higher). Delphi systems were changed with Bosch ones in Euro 5 version.